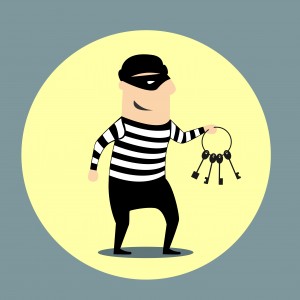 Think of a burglar and what do you picture? Maybe you imagine an individual in a black and white stripped top, black eye mask, a swag bag over his shoulder and a crow bar in the other hand. Well, this stereotypical view is certainly no longer the case, if it ever was, as smart burglars are unfortunately making themselves known.

In the digital age, the internet and associated apps allow us to do things we could once never thought possible. However, despite their praised ability to aid and change daily life, some burglars are taking advantage of the good natured intentions of mobile applications. Read on and ensure you out smart these so-called ‘smart’ burglars:

What is Key Me?

The likelihood is that you have never heard of ‘Key Me’ over here in the UK. In fact, the little well known app, which was born in New York City, is barely used outside of the United States. There are some good reasons for this which we will explain in a minute.

The app is designed to let an individual photograph their keys and upload them to a server, it is suitable for both personal and company use. The app then allows the photographs to be 3-D printed at a local kiosk or mail ordered to a specified address. The company’s unique selling point boasts that you no longer have to take the trip to a locksmith for highly accurate key copies. Even more, what locksmith can produce a key in 30 seconds like their kiosks can?

They even lure you in with the promise of customised designs such as your favourite sports teams, movie characters, and designer skins.

This does beg the question that if you have lost your keys, perhaps the most sensible thing to do would be to change your locks! But leaving that argument to one side for a minute let’s look at the app in more detail.

Key Me: A Reliable App?

Allowing you to store, share, and duplicate physical keys using a digital scan the company promise to solve the problem of lockouts and lost keys. Which sounds great and is most likely to be possible in other parts of the world, outside of the UK as their locking systems are not as advanced or as secure as here on the British Isles.

In America the most common form of lock for a domestic property is a Yale style lock which can be easily replicated using the photograph entered into the app. Here in the UK most homes are protected by a second door lock – a dead lock which uses a mortice key. These can’t be covered by the app. Over here we also have much more widespread use of Mul-T-Loc keys such as the MT5, these are far more sophisticated and need to be scanned in order to copy them.

So although this app is not likely to catch on here in the UK, its success in the US is now also under question. Some of the reviews for the app weren’t positive and one stood out in particular: Wired.com reported a story in which the writer broke into their friend’s house, with their permission, using this App. Visiting the friend in a Brooklyn ‘walk-up’ apartment he threw his keys out the window rather than walking down to let the visitor in. During the time in which the writer entered the building and walked up the stairs they had copied the key on the mobile app. Upon leaving the friends home, walking to the closest Key Me kiosk and copying the keys, they were able to break into the apartment just hours later.

Keys in the Wrong Hands

With plenty of similar apps on the market you must be vigilant about where you leave your keys and who you share them with.  Opportunist thieves could take advantage of your naïve nature, so avoid leaving your keys on your desk, at the bar whilst buying another round, or in your hotel room for example. Remember that the app allows you to scan a copy into their phone in less than 30 seconds, giving them access to your home.

What about parking valets? Imparting a large deal of trust into the service they offer and the individual fulfilling your requirement we suggest you ensure that your house keys aren’t handed over at the same time. Equally be wary of neighbours who you may have given a copy to, those left ‘secretly’ under door mats, or lending your keys to anyone else. In terms of business use of this app, or other similar variations, ensure that your employees do not have access to physically order or print copies themselves. Whilst you want to trust your team, employees, and friends it is vital that you are sensible and understand the rise of the ‘smart’ burglar.

Here in the UK, businesses and commercial properties are unlikely to rely on a single Yale style lock to protect their property. Insurance companies would not cover such a low security protection method. These days many companies have sophisticated systems which might include the use of Digital Locks. Designed for the internal doors of a building for quick, easy entry access without the hassle of keys. Master Key Systems mean that staff can be given access to different areas of a premises with a key with full or limited access capabilities.

These locking systems leave behind the worries of duplicate keys and the abilities of various locksmith apps. Call the team at Thornhill Security to discuss the alternative locking options available to you on 0117 967 4994.