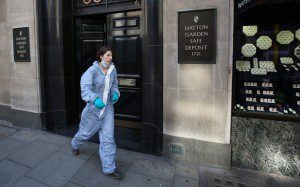 greeted with a rather unbelievable sight; millions of pounds worth of valuables missing from the deposit vault as there were approximately 70 deposit lockers broken into.

Police were alerted to the incident, and called in early on the morning of Tuesday 7th April. Specialist Officers of the Metropolitan Police who deal with commercial and armed robberies are now dealing with the investigation.

According to reports, just after midnight on Easter Friday an alarm monitoring company alerted police to an alarm activation. However, from reports there was no police response to the claim due to the way the call was graded. Therefore it wasn’t until 4 days later that the heist was discovered.

Hatton Garden Street is located in the district of Holborn in the London Borough of Camden and is most famous for being the centre of the UK diamond trade and London’s jewellery quarter. Marketing themselves as one of London’s most successful and leading safe deposit company they aim to provide clients with a secure and cost-effective solution to store and protect important and irreplaceable belongings. Safety deposit boxes in the vault are mainly used by Hatton Garden jewellers and gold dealers themselves.

From the outside there was no visible damage. So, after gaining access to the building, the thieves reportedly abseiled down a lift shaft to the underground vault before drilling through a 20 inches thick concrete wall to reach more than 300 security boxes.

It is reported that CCTV footage showing close details of the gang breaking in through a door was found approximately a week later when an employee happened to stumble on images showing the thief’s in action, which was then passed onto the police.

As the thieves continue to get away with this unbelievable break in speculation is rife. Many believe, that the heist was an inside job, and it seems plausible we must admit. The robbers seemed to possess a great deal of inside knowledge especially evident as they seemed to know that some CCTV cameras were not working. Located in a building which accommodates many other businesses, suspicion could lie just about anywhere.

You may also remember that just a week previously a major fire broke out in Holborn, leading to widespread disruption and road closures. In the following days the police, who believe the fire was set intentionally, are finding the coincidence impossible to ignore.

Could Thieves Have Struck Before?

Continuing the investigation police are currently examining startling similarities between the recent Hatton Garden and heist and that of a bank raid in Berlin a couple of years ago.

In 2013 thieves made off with valuables worth more than £8.3million from the vault of Volksbank in Steglitz, South West Berlin. The robbers spent weeks digging a tunnel from a rented parking space to reach the walls of the underground vault before drilling through 2 and a half feet of reinforced concrete. In both cases the police believe that an insider had passed on vital information that enabled the thieves to beat multiple security systems. Or were they inspired by this robbery?